HTTP/2 fingerprinting is a method by which web servers can identify which client is sending the request to them1. It can identify the browser type and version, for instance, or whether a script is used. The method relies on the internals of the HTTP/2 protocol which are less widely known that those of its simpler predecessor HTTP/1.1. In this post I will first give a short description of the HTTP/2 protocol, then provide details on how a web server can use the protocol’s various parameters to identify the client. Finally, I will list methods of checking and controlling a client’s HTTP/2 signature.

With HTTP/1.1 - the older, more familiar protocol - a client sends a textual request to the server (usually encrypted with TLS). Here’s how Chrome’s request looks like by default:

The User-Agent header contains the client’s exact version and thus can be used to identify the client. However, this is easy to fake with any http library or command line tool and is no longer considered a reliable method of fingerprinting by any means. A little less known fact is that the Accept header also takes different values depending on the client. This is also easy to fake however.

A short introduction to HTTP/2

HTTP/2 is a major revision of the HTTP protocol and has been around since around 2015. About half of all websites now use HTTP/22, and basically all the popular sites use it by default. A great in-depth overview of the HTTP/2 protocol can be found in this article. I will detail the parts most important to this article.

You can check if a website is running HTTP/2 with the Chrome/Firefox developer tools. For example, in Firefox it would look like the following:

The primary goal of HTTP/2 is to improve the performance of websites and web applications. It achieves that goal by implementing a few core features:

The application semantics of the HTTP protocol are not changed however: It is still composed of the familiar request/response model with URIs, HTTP methods, HTTP headers and status codes.

HTTP/2 is a binary protocol, as opposed to the textual HTTP/1.1. The messages in HTTP/2 are composed of frames, with ten types of frames serving different purposes. Frames are always part of a stream. A single stream is usually used to fetch a single resource from the server (html, script, image, etc.). Frames from multiple streams can be sent and received simultaneously, and thus multiplexing is achieved. A typical HTTP/2 connection would usually look like the following: 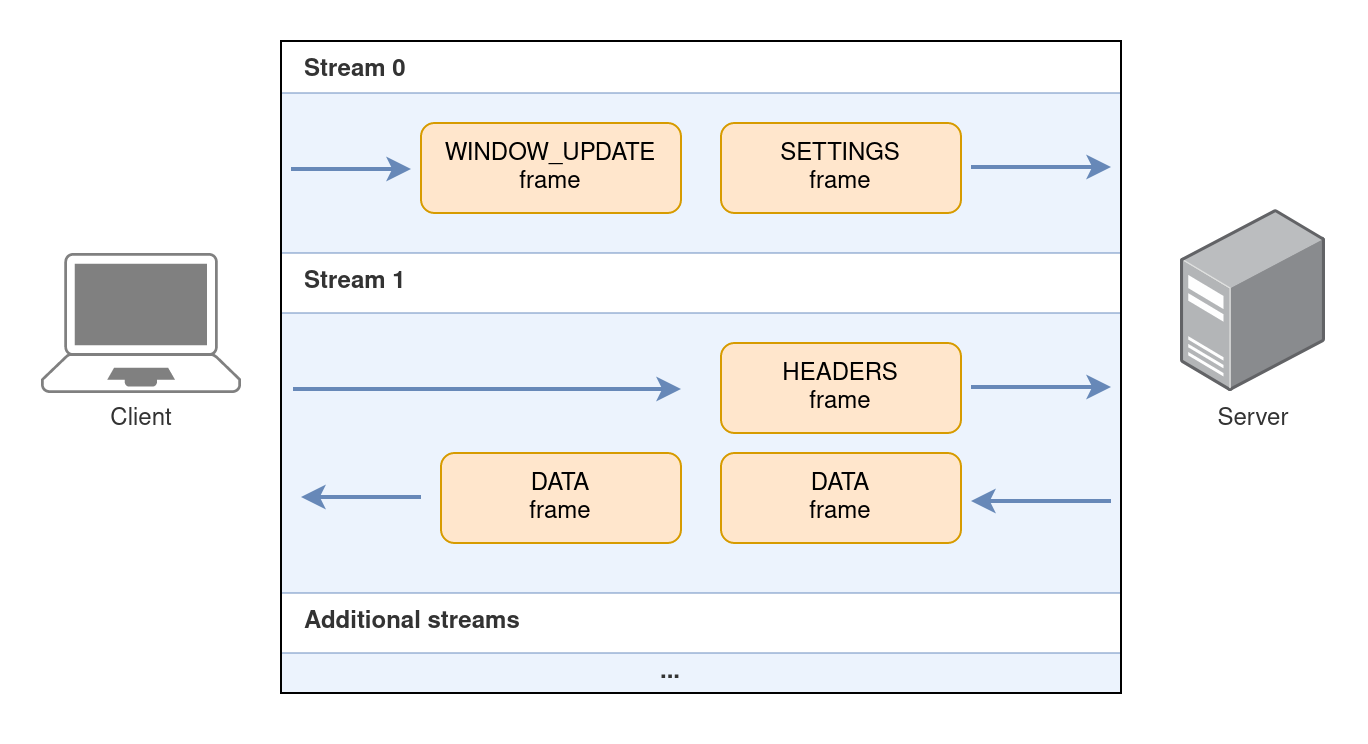 In this illustration the following frames are exchanged:

Let’s take a deeper look at some of the frames. Each of the frames contains information that allows clients to be easily fingerprinted by the server.

With the SETTINGS frame, the client informs the server about its HTTP/2 preferenecs. There are six different settings3 with which the client can control parameters such as the maximum number of concurrent streams, the maximum number of HTTP headers, the default window size and whether it supports the server push feature. Each HTTP/2 client uses a different set of settings. The same client will usually use the same set of settings regardless of what the actual HTTP request is.

To see what SETTINGS are sent by a client, I usually use nghttpd, a small HTTP/2 server that can log these parameters. Here are Chrome’s settings taken from the log:

Seen here are 4 different settings set by Chrome to some fixed values. Here are Firefox’s settings in comparison:

Both the kind of settings and their values are different, making the browsers easily distinguishable. As another example, curl sets the SETTINGS_ENABLE_PUSH setting to 0 to disable the server push feature, which makes it distinguishable from a browser. Because the settings aren’t easily controllable by the user, they become a reliable method for client fingerprinting.

HTTP/2 implements a mechanism for flow-control. Flow-control gives the receiving side means to regulate the flow of traffic on a per-stream basis. This is implemented using a window size, which is a number specifying how many bytes the receiver can process. There is a window size for each stream and a window size for the connection as a whole. This mechanism is pretty similar to TCP flow-control, but since multiple streams are multiplexed on top of a single TCP connection, HTTP/2 implements its own stream-level flow-control. For a full explanation you may refer to the RFC or to this article.

The stream-level default window size is controlled by the SETTINGS_INITIAL_WINDOW_SIZE in the SETTINGS frame, visible in the settings tables above. You can observe above that Chrome uses 6MB (6291456) and Firefox uses 128KB (131072).

As the client receives data, it can adjust the window size using a WINDOW_UPDATE frame, which increases its window size.

Chrome is in effect increasing the connection-level window size to 15MB (15663105+65535=15MB). Firefox, on the other hand, will increase it to 12MB. curl uses 32MB4. Hence this parameter can be used for fingerprinting as well.

The HEADERS frame contains, broadly speaking, all the functionality of HTTP/1.1 in a single frame. It contains the server’s host, the resource URI, the method (GET/POST/etc.) and the client’s headers. An important difference, however, is that everything is now considered a “header”. Here’s how it looks like for Chrome:

The method is encoded in the special :method header, the host in :authority, the scheme in :scheme and the URI in :path. The interesting thing here is that the order of these pseudo-headers is fixed but different for each client. From the protocol’s standpoint all orders are valid, but each client had decided to order them differently. The header order for some common clients (using the first letter of each pseudo-header to denote it):

This seemingly small difference is again making it easy to fingerprint the clients.

In HTTP/2 the client can define stream priorities. For example, the client may want to prioritize receiving JS scripts over images. This article being long enough, I will not describe this mechanism in full details. However, it is important to know two things:

Both the parent of each stream and its weight are communicated via the PRIORITY frame. Firefox, for example, builds a rather complex tree of streams that looks like the following: 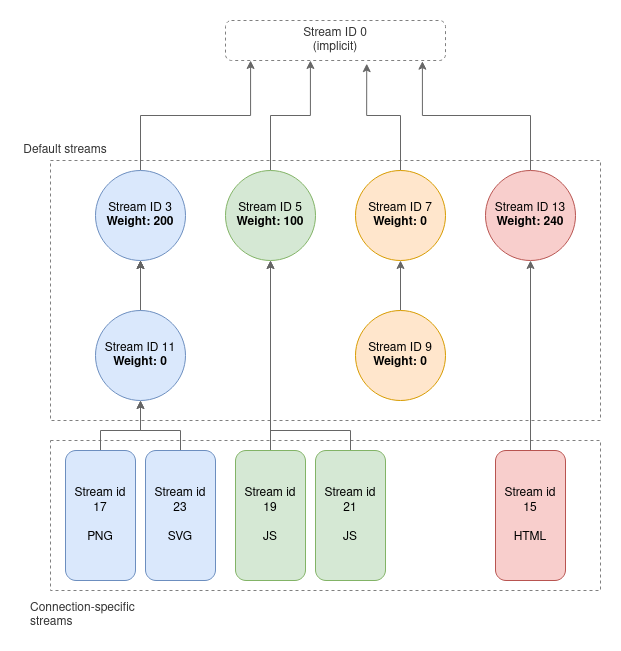 To create this tree Firefox by default will send a PRIORITY frame for streams 3,5,7,9,11,13 defining their parents and weights. Inspecting the nghttpd logs we observe this as follows:

The use of this specific tree structure and these specific weights is thus very indicative of Firefox.

Where is HTTP/2 fingerprinting being used?

HTTP/2 fingerprinting lets the server identify the client reliably before responding with data. Therefore it is used for similar purposes as TLS fingerprinting: Usually by commercial anti-DDOS and anti-bot solutions attempting to block automatic tools while allowing real browsers.

I’ve personally witnessed this method being used in the wild, such that real browsers were handled the real site’s content, but curl-impersonate, for example, got blocked. This was before HTTP/2 impersonation was fully implemented in curl-impersonate.

As seen above, the HTTP/2 protocol contains a lot of details, and the parameters involved are not always configurable by the user. Tools and libraries will usually try to abstract the HTTP/2 details away, and as a result each of these tools created its own unique HTTP/2 signature which cannot be easily altered.

To control your HTTP/2 signatures there are three methods that I’m aware of:

You may wonder how to check a clien’ts HTTP/2 signature. Unlike TLS fingerprinting which relies on an unencrypted TLS Client Hello packet, the HTTP/2 frames will almost always be encrypted. This makes it a bit harder to inspect. There are two options which I like to use.

The TS1 method and library

TS1 is a method and a Python package I developed for the purpose of checking and comparing clients’ signatures. It is available at https://github.com/lwthiker/ts1 or on PyPI.

TS1 takes all the HTTP/2 frames the client sends until, and including, the HEADERS frame, and encodes them into a JSON format that looks like the following (shown is a truncated version):

The JSON is then turned into a canonical form, a compactified form according to certain rules:

then a SHA1 hash of the string is calculated to produce the TS1 signature hash:

Different clients will have different hashes, and the hashes can be easily saved in a database for easy comparison of clients’ signatures.

More details about using the TS1 library can be found in the GitHub page.

I will conclude with the same words from the previous post: Fingerprinting has become extremely common throughout the web, and while it is used for legitimate purposes such as blocking DDOS attacks, it is also making the web less open, less private and much more restrictive towards specific web clients. I have witnessed before how websites mark certain browsers as suspicious while letting in others (not intentionally probably), with TLS and HTTP fingerprinting being the main methods to achieve that.

With the added awareness about the prevelance of such techniques, I hope that browsers, web clients and future protocol designers will be more attentive towards these kinds of issues.